Microsoft Dynamics CRM does not offer a Radar chart OOB but it is still possible to use them!

Creating a radar chart is a simple matter of a quick change to the chart XML, if you aren’t familiar with how to edit the XML try reviewing this post in which I give an example.

Here (for example) is a radar chart showing the distribution of fish I have caught by lake at my favourite fishing location. A typical CRM chart! But hopefully it works as a visual example of how you can display your data.

To achieve this you simply change the ChartType in the XML to Radar.

You can also use the RadarDrawingStyle custom property to show the chart as Area, Line or Marker. 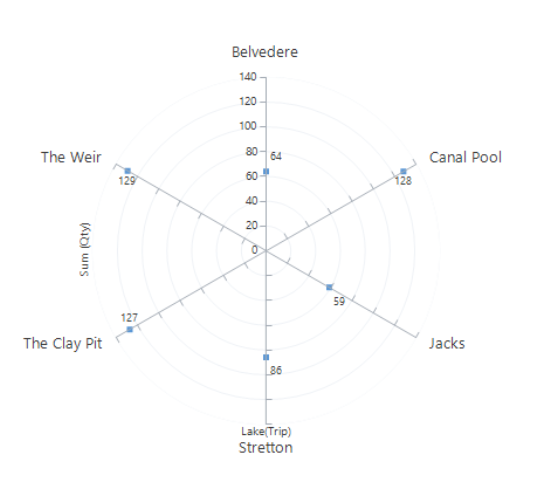 You can also have multiple series of data on the chart, an example is below, I did find that the trick here was to create the chart as a bar chart with the multiple series and then edit the XML to change it to Radar. As once you have changed the XML you can not add the additional series using the CRM chart designer.

Note you can also make Radar charts 3D! Which actually simply shades the background with a graduated grey effect. So not really 3D but still a nice effect!

One thought on “Charts – Radar Charts”