This is the next post in my series aimed at helping anyone preparing for the MB2-712 certification. (Customization and Configuration in Microsoft Dynamics CRM 2016) This time my focus will be charts.

Charts are not just static representations of data within CRM 2016, they allow us to extend the functionality of views to better visualize data and at the same time we can interact with data directly from them.

From an MB2-712 exam point of view you will need to understand how to use them but also what are the customization capabilities.

Microsoft Dynamics CRM has several out of the box charts to help with sales analysis and customer service. It is also possible for general users to create personal charts. And beyond these developers can add additional system charts as required. (And share them with users / teams.)

There are two types of charts. Personal and system.

The chart below shows a typical example of a sales pipeline shown in a funnel chart. 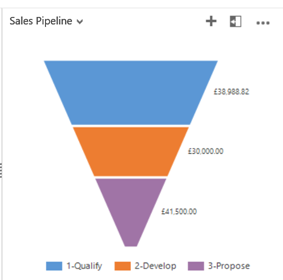 Tip:
As shown below you can click on segment of a chart, that you have the ability to further filter on any field. Clicking the blue arrow will drill into the chart can represent the data in any one of the five chart types available in the filter. (Bar, Column, Funnel, Line and Pie.)

It is also possible to export the XML of the chart, edit it and re-import. This process allows other chart types to be created, including;

Tip:
In addition to changing the chart type in the XML other parameters such as colour, labels and drawing style can be customized.

Charts can be single series or multi-series. A multi-series chart can represent data using two chart types, one laid over the other. For example, a column and line in a single chart. Below you can see a sample chart showing the number of opportunities created each month as a count, then their estimated revenue is shown as a line on the same chart. 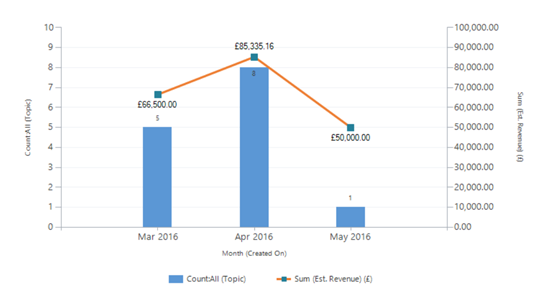 When plotting charts, it is possible to limit the data returned using options to show top “n” or bottom “n” rows. For example, the chart below shows my top 5 opportunities by estimated revenue.

Tip:
As charts are graphical your best way to learn about their capabilities is with some hands on experience.

Once the personal chart is saved we can use the “…” menu to edit the chart, share it with other users / teams. It is also here that we can import and export charts.

The share option can be used to share personal charts with user or teams. It is also possible to govern the access level each person is given. You could opt to only allow them to read the chart. Or you can add in write, delete, assign and share privileges as required. Keep in mind that when you share a chart only the chart is shared not the underlying data. Meaning the security model is preserved.

Later you may add charts to dashboards and share out those dashboards. It is important to also be aware that the chart would need to be shared separately. Sharing the dashboard does not automatically share the charts and views on the dashboard.

When we export a chart the xml used to render the chart is exported. An example of the XML for a chart is shown below.

FYI: You won’t need to understand the coding detail of this xml for your MB2-712 exam but it is still worth researching! I have written several blog posts on this subject that you can access here.

Another use of the export option is to export a personal chart that can then be imported as a system chart. I often initially create my charts as personal charts and then import them as system charts only once I’m completely happy with their layout. Creation of system charts is done either in default solution using the customization option or from your solution.

Below I have shown the customization screen for system charts. Notice that under each entity we have a charts option. And within that I can see all of the system charts available to users. I can edit existing charts or create new ones from here. Alternatively, I could import a chart created as a personal chart. 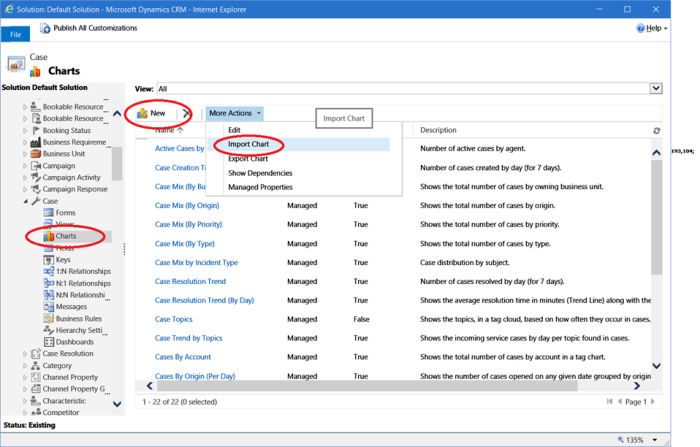 I hope this post has given you a feel for the information needed to revise for the MB2-712 exam. Next time I will build on this by looking at dashboards.
J