As I prepare for my Dynamics 365 certification in sales (MB2-717), I am creating blog posts based on my revision. I hope that collectively these posts may prove useful to anyone also preparing for the MB2-717 exam. This time I will cover the concepts around sales territories.

You will see that territories are mentioned in the skills measured statement within the section headed “Manage the Sale Process”.

It is common to group sales people or sales teams into sales territories, maybe you have a north sales team and a south sales team. Sales Territories in Dynamics 365 are used to represent these divisions of the sales team.

Sales Territory can be used to show which sales area a sales manager is responsible for.

Notice that you can access the sales territories option in system from within the business management area under settings. 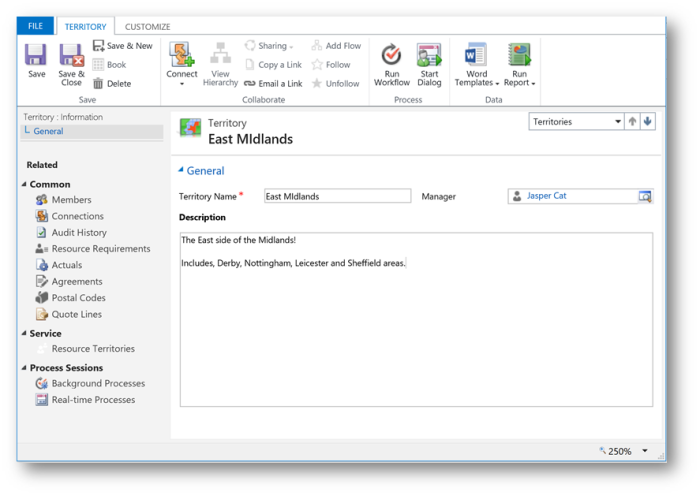 Having created my territory you can see that I have added a number of members. You can do this from the territory screen or by editing the territory lookup directly on the system user record. Each sales person can be the member of just one territory at once. 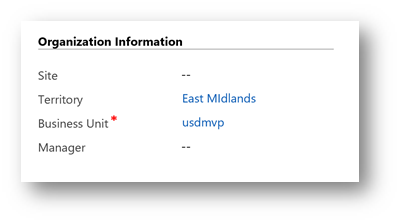 All this means that each sales territory has one manager and multiple members. Linking one manager to multiple sales team members.

Each system user can only be the member of one sales territory.

Each manager can only manage one sales territory. For example, the same person cannot manage both the north and south sales teams at the same time.

Accounts can be associated with sales territories. Below you can see an example of how I have assigned an account to my “East Midlands” territory.

Note:
If the territory field isn’t shown on the account form you may need to go into form customizations and add it. (As I did to be able to show you the screen below.) The process for customizing forms is beyond the scope of the MB2-717 exam. Although, I guess, you might need to be aware that this is required.

Assigning a default price list to a sales territory

Below you can see that on a price list I have added a territory relationship. This is actually achieved by creating a connection between the price list and the sales territory. The idea being that once you have connected the price list to a sales territory, if you create any “transactional” records for accounts linked to that territory they will be automatically assigned this price list.

Meaning …. when I create a new opportunity for accounts in the connected territory the price list will default.

This means you can define differing prices for different territories. Imagine a company based in the south of England. They could (theoretically) have a slightly different pricing structure for accounts in Northern Island or Scotland. (Maybe as a result of increased time / cost of travelling a greater distance to service the customer.) 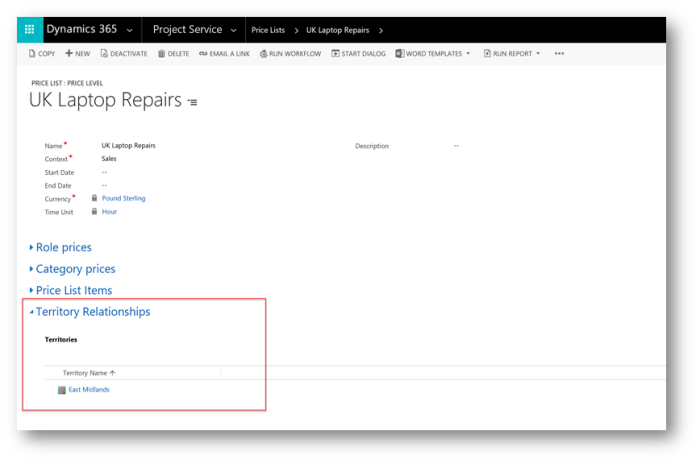 A final comment, you may have noticed that I have described sales territories in terms of geographical locations, as that is typically how we’d expect them to be used. But nothing (out of the box) in Dynamics 365 actually ties the “sales” territory to a geographical area. So you could use them to group sales people or accounts on a different basis. For example, you could have a sales territory for “Key Accounts” etc.

Note: Sales territories do not default based on location but we do have a concept of defining postcodes for a territory. This is applicable only when using the Field Service module to default the service territory.

Hopefully this post has given you an understanding of the out of the box sales territory functionality and helped with you preparation for the MB2-717 exam.