As I prepare for my Dynamics 365 certification in sales (MB2-717), I am creating blog posts based on my revision. I hope that collectively these posts may prove useful to anyone also preparing for the MB2-717 exam. This time I will cover the concepts around currencies.

Occasionally the customers I work with operate in just one currency. But it is becoming more and more common for even the smallest companies to trade across wide geographical areas. For example, via the internet it is increasingly easy to promote products in many countries. Sometimes you can “get away” with only selling your products in just Dollars or Pounds. But more often than not you’ll need to produce quotes, price lists and orders in multiple currencies. Microsoft Dynamics 365 has the capability to handle these multicurrency scenarios.

Within Microsoft Dynamics 365 you can maintain the various currencies you require in the currencies option in business management under settings. (See below.)

Within the currencies option you can configure additional currencies and their exchange rates as required. Now before we review these options lets discuss the concept of the base currency.

Whenever you first create a new Dynamics 365 organization you must define your default (base) currency. The base currency applies to all momentary values across the whole system. For every currency stored two values are always available the base currency value and the corresponding “local” currencies value. Often you will find these values will contain the same information but they will start to differ when alternatives currencies are created. (We’ll look at this in more detail a little later.)

The base currency always has an exchange rate of 1. Meaning all other currency values are derived from this base. The base currency cannot be deleted and cannot be changed. (Although you can revise some details such as precision, display name and symbol.

Now we understand the base currency we can add others. Let’s imagine I trade in US Dollars and Euros in addition to my base currency of Pounds Sterling.

The configuration details for both euro and US Dollar are actually held within Microsoft Dynamics as preconfigured system currencies. When you create these you’ll simply need to enter the exchange rate you want to use.

Now because I’m using a system currency I can select my currency code from one of hundreds of preconfigured currencies. 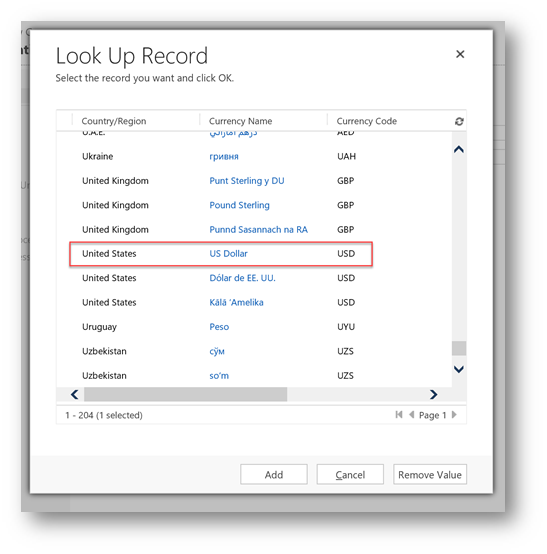 Very occasionally you might find you want to define a currency doesn’t exist. Let’s say a new currency is created (maybe something like Bitcoin) and you want to add it. Then you use the custom option, when you use a custom currency you will need to enter the currency code, name, precision and symbol. In addition to the exchange rate.

Notice that the exchange rate to your base currency can include up to 10 decimals. The maximum precision on a currency is 4 decimals places.

As a slight aside, I haven’t worked on a real project using Bitcoin, yet!! But I believe that bitcoin is a currency that could be expressed as up to 8 decimal places. (In Dynamics 365 we have a maximum precision of 4.) One day knowing the currency precision allows a maximum of 4 digits might be useful knowledge!

Firstly, it is important to be aware that each user can set their own default currency. Below you can see that I have opened my user settings and changed my default currency to Bitcoin. 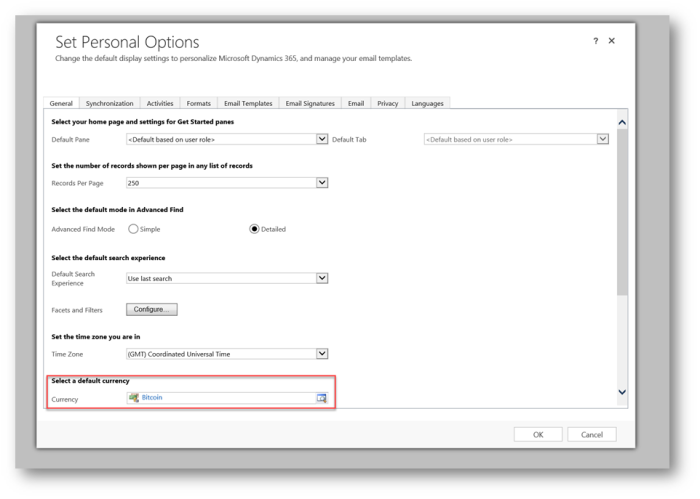 Having changed my default currency to Bitcoin any new records I create using a currency may default to Bitcoin. It is important to understand the implications / meaning of this. Existing opportunities aren’t going to suddenly change to be Bitcoin, they will remain in whatever currency has already been set.

If I create a new opportunity from an account that has “USD” set as its currency then the opportunity would be in USD. (Say by pressing + on a sub grid of opportunities on the account.)

But if I create a new opportunity directly from an opportunity view no account will be selected yet. So the currency would be for my default. (Which is now Bitcoin.) Whilst my opportunity has defaulted to Bitcoin if I try to apply a price list already configured to work in say pound sterling the system will give me a warning message. 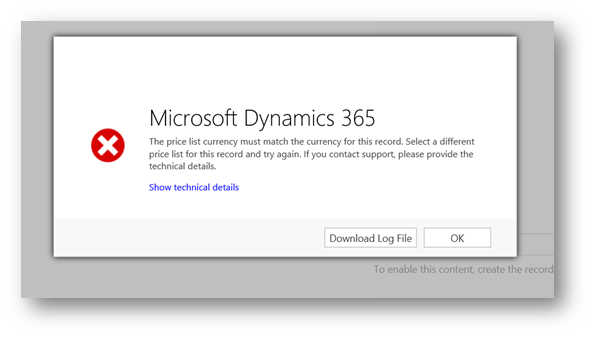 On accounts, leads, contacts, products, price lists and discount lists you can define a default currency field. Once you have set a different default currency on an lead/contact/account then any new transactional record created for them will default to that currency. (Not forgetting that you will then also have to select an appropriate price list with a matching currency.)

Whenever a developer adds a field to hold a money value multiple fields will be automatically created! Meaning we always have three fields connected with each money value. Firstly a currency lookup will get created (if one doesn’t already exist). Then two value fields will be created. The first value field will hold the actual currency value, the second will hold the base currency value.

To try to demonstrate this I quickly created a custom entity containing a money value. (The following logic applies to all money fields on all entities.)

Below you can see my entity. As a developer I just created a field called “A Money Value”. Three fields were created by doing this. As a demonstration I added them all of them to my form.

You can see below that I have added a number of records to my demo entity. The money value column includes the values the users will have entered. Whilst the base currency value has been calculated in terms of pound sterling. (As pounds are my base currency.)

Well firstly I’d return to my currency settings and change the exchange rate. But what does that do?

To demonstrate this I have created two records. One before my exchange rate change and one after. They have the same dollar value but the base currency value differs.

The above actually demonstrates a potential challenge of multi-currency! Because if the exchange rate fluctuates you may need to consider manually amend any active opportunities to reflect the required price revisions.

Hopefully this post has given you a good understand of the basics of using multiple currencies in Dynamics 365 and helped in your preparation for the MB2-717 exam. 