As I prepare for my Dynamics 365 certification in sales (MB 210), I’m creating blog posts based on my revision. I hope that collectively these posts may prove useful to anyone also preparing for the MB 210 exam. This time I will cover the concepts around goals.

You will see that goals are mentioned in the skills measured statement within the section headed “Perform Configuration”.

A goal is simply a target that you wish to measure performance against. Thinking specifically about sales, example goals might include the value of won opportunities per quarter or the number of qualified leads per week. Goals can be defined for each person and rolled into a larger parent goal, using a concept of parent and child goals.

Goals could be created and maintained from either the Sales or Service areas of Dynamics 365. This is because goals connected with service can be just as important as those connected with sales. Actually goals can be related to any system or custom entity.

You can see below that from within my sales App I can access the maintenance goal options. Including goals, goal metrics and rollup queries.

The Goal metrics option allows a user to define how a goal is measured.

For example: counting the number of opportunities, totaling revenue etc.

Dynamics 365 comes with a number of out of the box goal metrics, but you can also define others. Below you can see that out of the box I have goal metrics for both sales and service. From a sales point of view the revenue target will be important.

In the new Unified Interface form layout the goal metric information is spread over 3 tabs. First we have the general tab. Here the goal is given a name and we define the metric type.

The two metric types are count and amount. Counts will be used when you want to measure things like the number of leads created or count the number of new accounts created. Amount metrics will have a further data type of decimal, money or integer. We’d use an amount type for goals connected with measuring total revenue or total invoiced values etc. 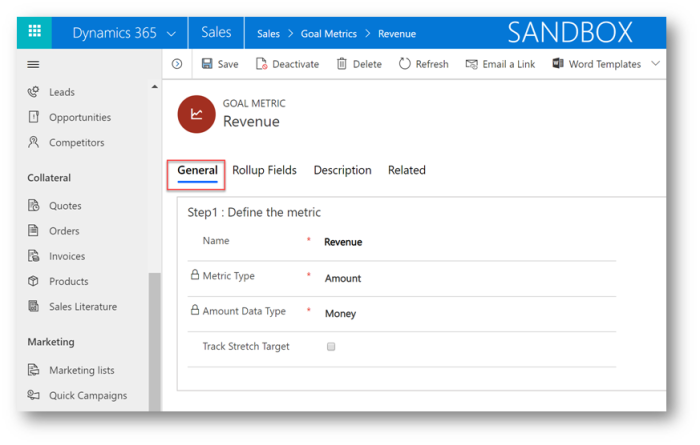 Rollup fields form part of the goal metric, these contain the calculated fields that are used to derive the actual and in-progress values. When defining the in-progress and actual fields, the user not only says how the field will be calculated but also decides on which date the field will apply. For example: in-progress opportunities might get counted based on their estimated close date but actual revenue will get counted based on date the opportunity was won.

The final tab “description” is simply used to allow you to give a text description of the goal metric. Assuming that some goal metrics could be complicated entering this might help users know which metrics to use for what purposes.

Information for each goal is spread over multiple tabs.

In the general tab we define the parent goal (if required) and which goal metric to use.

Goal Owner – Every goal is tied to a user or team that owns the goal. This is the person or team responsible for achieving the goal.

Goal Manager – This is the person who manages the goal.

Next, we have the time period tab. This is important as all goals are time bound and must be linked to a fiscal period or custom period. I have described the creation of fiscal periods in another post!

Goal Time Period – All goals are time bound, whenever a goal is created you need to identify the time period it will “run” for. E.g. Week, month, year or a fiscal period. Fiscal periods, each goal can be linked to a fiscal period. If a fiscal period is selected you must select the year, linking the goal to a specific period. Fiscal periods might refer to a year that starts on a different basis, for example for many companies their fiscal year runs April to March. So period 1 is April. (Rather than January!) Alternatively, a custom period can be entered, for this the user must enter a specific start and end date.

Targets – The target is simply what you’re shooting for. For example: To win £100,000 worth of opportunities in a quarter. A goal target is typically measured against actual and in-progress values. The actual target might be to sell £100k between Jan and March, the in-progress figure would reflect the value of opportunities likely to close between Jan and March. All goals must have a target value and a time period.

Each Goal will have goal criteria, defined on the “Goal Criteria” tab;

Rollup Queries – In some situations you’ll need to fine tune the data sets. For example: To only count opportunities with a high probability of conversion in my in-progress target. In these circumstance rollup queries are used to articulate the records to be counted. You can define and add rollup queries for in-progress and actual targets. A rollup query is essentially an advanced find used to further filter the data. It is important to notice that the entity type MUST be the same as the entity selected for the goal.

Once the calculation has run automatically or by selecting the Recalculate button the actuals (and in-progress values) can be seen on the goal form. (In the actuals tab.)

Below you can see that the administrator can decide the frequency to roll-up (recalculate) goals. And for how long after the end date has been reached to continue this roll-up. (You probably don’t want to roll-up a goal indefinitely, but you might want to continue recalculating for a defined period to allow for any late revisions.) 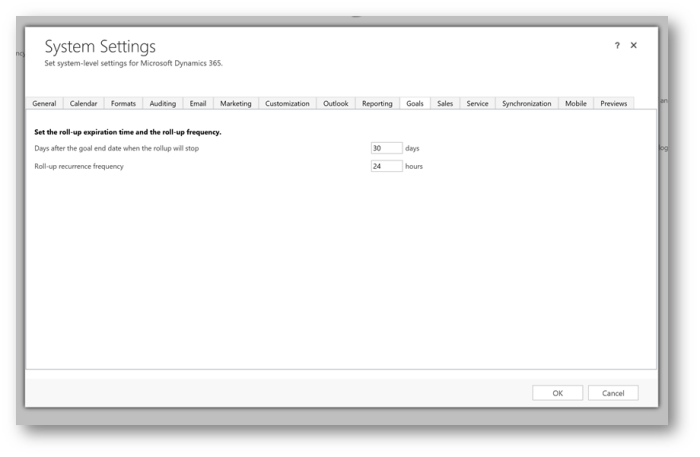 The “today’s target chart” derives a target based on where you should be at relative to your goal. Say I have a target of 100 by end of March but as I am at the end of Feb today’s target chart would show a lower value of 65. In the example below my target was something like 300,000 but the today target is showing as 200,000 (ish). 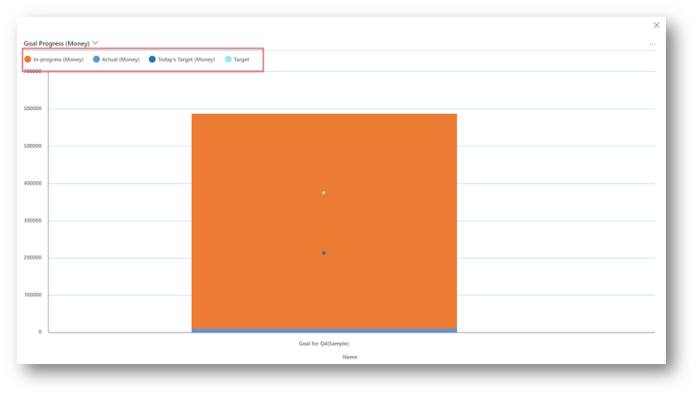 Tip:
If you have used goals previously in the classic web interface you will find that the overall logic is unchanged, but the screen navigation “feels” quite different. So, I do encourage you to get some hands on time with the new Unified Interface.