This post is the next in my series covering revision topics for the MB2-712 certification. (Microsoft Dynamics CRM 0216 Customization and Configuration).

This time I will look at teams.

Teams have several uses in CRM. Teams are essentially lists or groups of users and can be used to manage security, reporting and sharing.

Each business has a default team. This is a “special” team that cannot be removed. Users are automatically added as they are assigned to the business unit. Below you can see the default team for my International Sales Department. Notice the description highlights the fact that this is a default team. 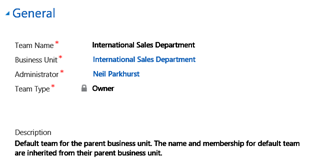 Owner teams are the original / traditional type of team found in CRM. Owner teams have members and the team can own records. (Assuming granted permissions to do so with a security role!) For example, an account might be owned by the “International Sales Team” rather than by an individual user.

The membership to owner teams can change but tends to be static. Someone joins the team and remains part of that team for all “activities” conducted by the team. An owner team has a finite number of members at any point in time.

Owner teams are useful when reporting on the team as a whole is required. For example, the team could have a goal and be measured as a group against that target.

Owner teams are associated with a business unit. As they will need to be assigned a security role from that business unit. But the members of the team do not have to belong to the same business unit. This is useful when a group of people need to collaborate across business units.

They are by implication very fluid / dynamics and will be formed or dissolved almost at will.

The number of members, who those members are or even if the team will exist is not a given.Consider an access team used on opportunity to reflect the sales team. It might be the deal is very small and an access team is never required for that opportunity. Or it might be a large deal that needs multiple people from sales involved.

NOTE: When users are added to the sub grid in background an access team for this specific record is automatically created. By default you aren’t going to see this team in the security settings area of CRM. But you can do an advanced find on teams to view it if required.

Once enabled you CAN disable access teams if required.

A subgrid for the team members will need to be added to the entity. Below I have shown the access team I added to my opportunity form. (Again using the CRM customizations option.)  Notice that in the data source the records field is set to All Record Types, I have then selected Users as the entity. And I have set the default view to Associated Record Team Members. Then finally I have selected the required access team template opportunity. 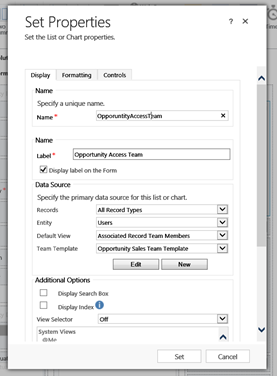 You can have more than one access team template for each entity. So that each group of user may have different permissions. Although out of the box the maximum number of access teams per entity is 5.

Hopefully I have given you a flavour for teams and what you might need to learn for the MB2-713 exam. As always I suggest you get some hands-on practice. Create some owner and access teams then “play” around with how they operate.
J

I am able to provide training and consultancy on any Dynamics 365 project. And of course I'd love to be involved in your Unified Service Desk project!